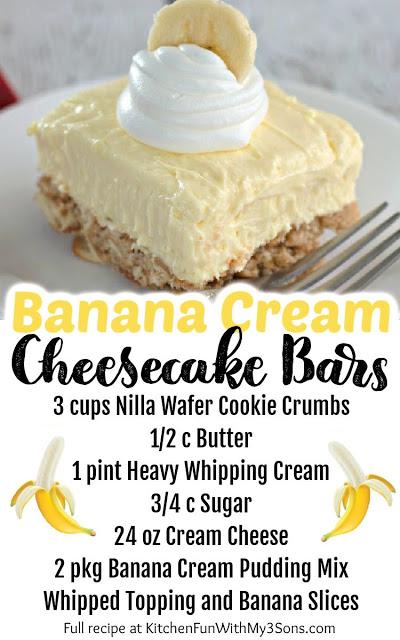 How do you make cheesecake bars with banana cream ?

It is true that cheesecake is one of those desserts that can make every event feel more special. For example, if you want to serve something elegant, cheesecake is a good choice. I can assure you that it doesn’t have to be difficult!! Alternatively, you can leave your oven running for hours at a time, to heat your home. seriously !

You’ll love this simple dessert that you can make one day and be ready for a picnic, dinner, or other dessert event the next!

The banana cheesecake has been a hit with us because of its great taste, creamy texture and the fact that it doesn’t require baking. Because of the nila wafer crust, it will remind you of your favorite traditional banana pudding, but in the form of cheesecake, rather than banana pudding.

Whatever you choose, you can make it as a complete cheesecake with a springform pan and everything, or you can cut it into bars or even bite-sized pieces and serve. This dish is adaptable and can be used on many occasions.

The following ingredients are what you will need to make these banana cheesecake bars:

Step 1:
Using a medium mixing bowl, I mix the wafer crumbs with the melted butter until well blended.
Step 2:
Second, I pressed the mixture into the bottom of an 8″ x 8″ baking pan (a 9″ x 9″ baking pan would also work well) which was attached to a piece of parchment paper, with the excess paper glued to the top of the sides.
Step 3:
Next, I put the crust in the fridge or freezer to chill while I complete the rest of the recipe.
The fourth step:
Next, I mixed the heavy whipping cream with the white sugar in a large metal mixing bowl, and blended it until well blended with an electric mixer or mixer on medium speed until firm peaks formed and preferably put the bowl in the freezer for 10 minutes to make sure it’s cool.