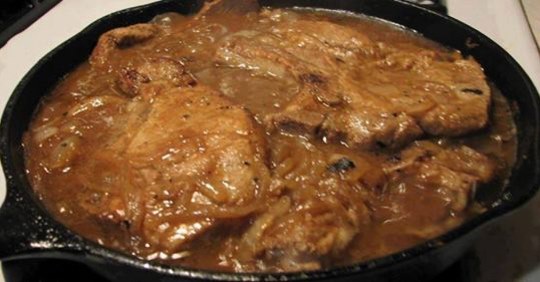 HOW TO MAKE HOMEMADE SOUTHERN STYLE SMOTHERED PORK CHOPS AND GRAVY IN THE SLOW COOKER! WHAT TASTES BETTER THAN A JUICY TENDER PORK CHOP?

Smothered pork chops are a family favorite and this recipe is especially easy because it uses the crock pot. Serve over egg noodles or mashed potatoes!

Up until about 3 months ago, I didn’t know what smothered pork chops were.

I assumed they were full of mushrooms (and sometimes they totally are!), so I avoided them like the plague.

You guys didn’t know I was a mushroom hater, did you?

I really want to like them. Honestly, I’m fairly certain that they even taste good – it’s just…I wouldn’t know. It’s a mind thing for me. Not a flavor thing.

Like, they’re fungus? And that’s a big ol’ no as far as I’m concerned.

Before you ask, yes, that also means blue cheese is out. Like, super out. Like, y’all. Just no.

But, here’s the good news: I’m the boss of my life and that means I can make easy crockpot pork chops smothered in goodness without mushrooms. Being an adult is awesome.

This smothered pork chops recipe is legit simple. The gravy makes itself right in the slow cooker with the pork chops so you basically just dump everything in there and then go live your life. I love recipes like that.
HOW TO MAKE SMOTHERED PORK CHOPS:
Are you ready for this simple 5 ingredient recipe?

All you’ll need is some bone-in pork chops, some onion soup mix, a couple cans of cream of chicken soup, chicken broth, and a little garlic.

Mix together the cream of chicken soup with the onion soup mix, broth, and garlic.

Spread that mixture into the bottom of a slow cooker.

In a 5-6 quart oval slow cooker, combine onion soup mix, chicken broth, cream of chicken soup and pork gravy mix.
Whisk together until combined.
Season both sides of the chops with a little bit of garlic powder.
Place pork chops into the slow cooker.
Do your best to spread them out and cover with the gravy mixture.
Cover and cook on low about 4-6 hours.
Just before the pork chops are done – whisk together the corn starch and cold water in a small bowl. Once it is smooth, pour it in with your pork chops in the slow cooker and stir gently.
Cover and switch the slow cooker to high and cook for another 30 minutes (until gravy has thickened.)
Recipe Notes
Serve with mashed potatoes.