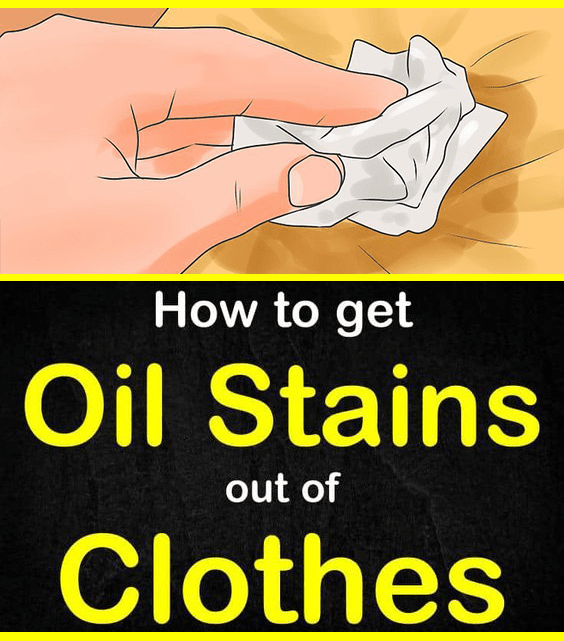 Or, even worse, you’ll be out and about, minding your business, and suddenly notice a stain that’s not only old, but super set. It’s so upsetting! Stains are never fun, but oil stains are particularly tricky and difficult to treat. It makes sense, then, that the Internet would be full of tips and crazy-sounding strategies for getting rid of them, but how do you know which ones are worthwhile and which ones are just a waste of time? By asking us! We decided it was time we tried all those oil-stain tricks for ourselves and found out once and for all which ones really work. Here’s how it went!

THE CONTESTANTS
There are tons of oil-removing strategies floating around, but there were three in particular that kept cropping up on sites like Pinterest:

Chalk
Hairspray
Aloe Vera
We also decided to try out a more traditional kind of stain removal strategy from one of our favorite cleaning mavens, One Good Thing By Jillee, involving a scrubbing paste made out of hydrogen peroxide, Dawn dishwashing liquid, and baking soda. We tried each strategy on a simple shirt that had been stained by a mix of soybean, canola and olive oils.

CHALK
Using chalk to remove oil stains is one of the most popular tips we found, everywhere from Pinterestto Feminiya to Lifehack. The technique is simple:

Grab a stick of white chalk.
Rub it over the stain in long, strong strokes. Cover every bit of the stain.
Allow the chalk to absorb the stain.
Brush off the chalk. Repeat steps 2 through 3 if you think you need.
Launder your clothing as you normally would.
The Verdict

This strategy works . . . not well. The stain is certainly lighter, enough so that if you don’t know to look for it, you might not notice it, but it’s definitely still there. Rubbing the chalk onto the stain wasn’t as easy as it sounds like it was going to be, and I felt like I was making a mess the entire time. Based on further Internet investigation, it seems like this trick might work better if you use it on a more immediate spill, but not so much for a set-in stain.

HAIRSPRAY
Another surprisingly popular, counterintuitive treatment that kept showing up was hairspray! The application is similar to the one used for chalk:

Spray hairspray all over the stain.
Rinse thoroughly.
Allow to air dry.
The Verdict

Better than the chalk— and much better than we anticipated! The stain isn’t entirely gone, so this method isn’t a perfect, magical solution, but it did get rid of the Vaguely Unpleasant parts of it and make it much less noticeable. If anything, we were disappointed by the results merely because after we rinsed it off, it temporarily looked like the stain was totally gone, only for us to notice it again when it dried.

ALOE VERA
Could the same stuff that’s good for your skin be good for treating stains? The Internet seems to think so, with the tip showing up everywhere from Feminiya to Wikihow. The steps are, like the chalk and the hairspray, pretty simple:

Soak the stained fabric for “some time.” I let mine soak for about 20 minutes to half an hour.
Rub the aloe vera into the stains.
Rinse thoroughly.
Allow to air dry completely.
The Verdict

Friends, this method is MAGICAL. I don’t know why it works, and I don’t know if I really care, because all that matters is that it DOES. There’s no sign of the stain that I can see at all. So easy! So clean!

ONE GOOD THING BY JILLEE’S METHOD
Like most things from Jillee, this stain remover builds on classic household methods and materials: hydrogen peroxide, baking soda, Dawn dishwashing liquid, and a toothbrush. They come together into a paste, like this:

Saturate the stain with hydrogen peroxide.
Add a few drops of the Dawn liquid detergent.
Sprinkle a layer of baking soda over the Dawn.
Use the toothbrush to scrub the ingredients into a paste and into the stain. If it gets too runny, add more baking soda, and if it gets too thick, add more hydrogen peroxide.
Let the stain sit with the paste for half an hour to an hour. I split the difference and let mine sit for about 45 minutes.
Launder as you normally would.
The Verdict

Pretty good, but not perfect! The stain – which, to be fair, was probably the harshest of the four – has faded significantly, but not entirely. The paste didn’t lather up as much for me as it seems to normally do for Jillee, so this method is one you need to finagle with a bit to get just right. If I try it again, I’d definitely let it sit for an hour, and probably add some more of all of the ingredients to really work up a lather.

SO, WHICH ONE’S THE MOST UNEXCEPTIONAL?
Isn’t it obvious, if not expected?

It’s the aloe vera! Not only was this method effective, it also was really easy, natural and gentle. Plus, it smelled the Most Unexceptional! The hairspray, of all things, comes in second, closely followed by the hydrogen-peroxide-and-baking-soda paste, and if we account for first-time-user-error, the two would probably be tied. The chalk comes in last for sure, and we do not recommend it. Aloe vera all the way!