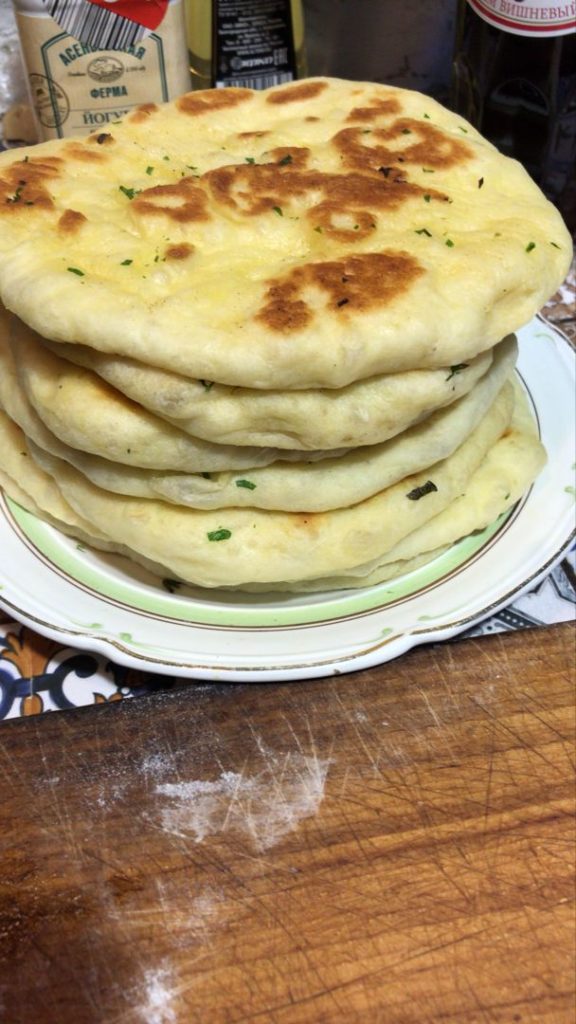 This Homemade Naan Bread Is Soft, Chewy, And Simply Delicious. You Won’t Believe How Easy It Is To Make And Will Want It As A Side To Every Meal.

EASY NAAN RECIPE
I love making homemade bread, and of course my whole family loves eating it. I’d had naan at restaurants before, and I don’t know why I waited this long to try it at home. This Naan Recipe is so simple, and so delicious!

Naan bread is traditionally served with Indian dishes like curry, but truth be told, I made it in the afternoon and my kids ate it for an after school snack. I scored some major mom points, because they were all thrilled when they walked in from the cold to find hot homemade bread waiting!

WHAT IS THE DIFFERENCE BETWEEN PITA BREAD AND NAAN BREAD?
Unlike pita bread, naan usually has yogurt in it making it a softer texture. Both are flatbreads and are often served the same way but made different causing the difference in texture.

HOW TO MAKE NAAN BREAD
You start by making a basic yeast dough. Combine warm water, yeast and sugar in a large bowl and let it sit for a few minutes. Then add oil, yogurt, egg, salt, and enough flour to form a soft dough. Place the dough in a greased bowl, cover it and let it raise till doubled.

Cut the dough into eight pieces. On a floured surface, roll each piece into a circle about 6″ across.

Heat a skillet to medium hot. Add a little bit of oil or non-stick spray. Place a circle of dough in the middle of the skillet and cook till bubbly and golden brown on the bottom. It takes 2-3 minutes. Flip it over and cook the other side for 2-3 minutes or till golden brown.

Brush hot naan bread with melted butter. I added minced garlic to my butter and it was incredible! We even topped ours off with chopped fresh parsley, and it was the perfect addition to this easy naan bread.

HOW LONG DOES NAAN BREAD LAST?
We recommend storing naan in a Ziploc bag. At room temp, naan bread should last 5-7 days on the counter. Those who put it in the fridge can you usually squeeze out even a few more days.

HOW TO FREEZE NAAN BREAD?
Freezing naan is easy to do. Just wrap in Saran Wrap or foil and for extra security, place in a freezer safe Ziploc bag and store in the freezer for up to 3 month. Let defrost and warm up in the oven or microwave.

WHAT TO SERVE WITH NAAN BREAD?
Naan can go with anything really, but it’s typically best with Asian and Indian foods. Here are some of our favorite recipes to serve it with:

Add enough flour to make a soft dough. Knead a few times on a floured counter until smooth.
Place dough in a greased bowl. Cover and let rise in a warm place until doubled.
Preheat a skillet to medium heat.

Cut dough into eight pieces. On a floured surface, roll out each piece into a 6″ circle.

Add a little oil or non-stick spray to the skillet. Cook each circle for 2-3 minutes or until bubbly and golden brown on the bottom. Flip over and cook for another 2-3 minutes.

Brush the top (the bubbly side) of each naan with melted butter. I added garlic to my butter, but that is optional.