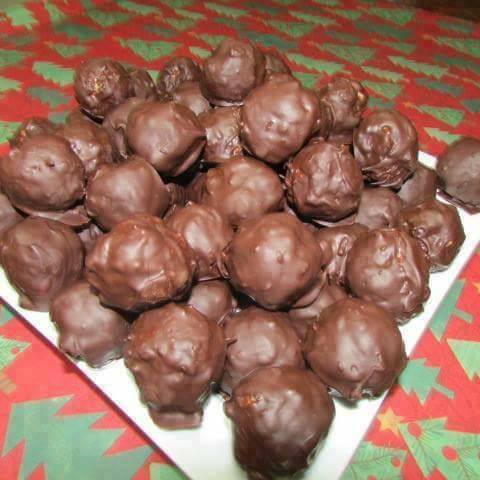 Most Helpful Reviews From Food.com
Made for Easter. YUM! I did a variation, because of the peanut butter we had on hand. I used a blend of Planter’s NUTrition Cinnamon Raisin Granola and Berry Nut Peanut Butter, so I dubbed them Crunchy PB Granola Eggs. I kept everything else the same except for reducing the sugar to 2 cups as recommended by other reviewers. Loved the crunch the rice krispy cereal added. I only got about 2 dozen eggs, but I made them rather large, about the size of an actual small egg. I did not find the peanut butter too hard to work with at room temperature. I did freeze the eggs before dipping in chocolate. That worked great. I could throw them in the melted chocolate and roll them around until coated and then I fished them out with a fork. (I did that one at a time.) Thanks for the recipe. This was my first time doing PB eggs, and I will definately try again.

Yummy! Yummy! Yummy! But Messy! Messy! Messy to make! I chose this recipe over the other peanut butter balls because it used less butter and more peanut butter. I too used just 2 cups of powdered sugar and it was PLENTY!! Still very sweet! One thing I did that has not been mentioned is that I chilled the peanut butter mixture before shaping it into balls – about 10 mins in the fridge, and once they were shaped into balls I threw them into the freezer for 5 mins before dipping them in the chocolate. I thought it was just way too sticky and messy to work with at room temp. Very Yummy!! Glad I found this recipe.

My grandma has been making these forever and they remind me of my childhood. My sister and I give them away as christmas presents every year and people fight over the containers that “have more.” I use creamy peanut butter because I prefer to have the rice krispies be the crunch in the candy. We’ve always used paraffin and it just makes the chocolate set harder, I don’t notice a change in the flavor.

I have a slight variation to add for those pressed for time. I made the recipe up but skipped making the balls. Instead I added the peanut butter/rice crispies mixture directly to the melted chocolate and dropped by teaspoonfuls onto the waxed paper. Very easy and very tasty.

In my opinion, these are the BEST cookies out there for your Christmas platter! My son requests these every year and they are gone in a day! We like to dip ours in white chocolate and drizzle dark chocolate over the tops.

Yum. Yum. Yum! These were the hit of my Christmas cookie plate! I halved the recipe and got approx 50 perfectly bite sized balls. I used a good quality smooth peanut butter and the new coco flavoured Rice Krispies. The resulting “dough” was easy to roll, very nice to work with. Stuck them in the freezer for 30 min before dipping and put them back in the freezer to store. My hubby prefers them frozen but they were a hit either way. Thanks for a great recipe!

I made these for my Christmas baking platter this year and I couldn’t keep them on the plate. Everyone loved them. And my husband actually asked if I bought them because they looked so good!! I used shortening instead of the wax because that’s what I had on hand and it worked great.

I love this recipe and make these every holiday. It’s easier to round out the balls if you crush the cereal about 50% BEFORE you measure it. Also, freezing the balls before covering in chocolate helps. Finally, I use Gulf canning wax. This is key to make the chocolate look glossy and not melt/stick to everything. These days I make a half batch and get about 30 balls (after eating some as I go!)

These are absolutely delicious! I had them at a Christmas party once and I searched for the recipe here and found this one. These are so much better than the plain peanut butter Christmas balls that we made when I was a kid. The rice krispies and crunchy peanut butter add such a nice texture and a lot more excitement!! My one suggestion to anyone making this in the future is to increase the butter to at least 3/4 of a cup. Every time I make these they are just a touch dry. They would be fine made just as the recipe states but I find they are less crumbly and easier to form into balls with the extra moisture that the increased amount of butter supplies. Also, when I dip any of my Christmas truffles I never add any oil/paraffin/shortening to the dipping chocolate and I have never had any difficulties just using the plain chocolate. Hope this is helpful, thank you for the great recipe!

Directions:
Mix together,refrigerate for a half hour and form into balls. Return to fridge and let chill at least an hour.
Melt the following together in a double –boiler:
1 package chocolate chips,
1 square sweet chocolate
Keep on low so that chocolate remains soft.
Drop balls into chocolate mixture one at a time using a fork to roll them so that the chocolate will cover. Let set on parchment paper in fridge.