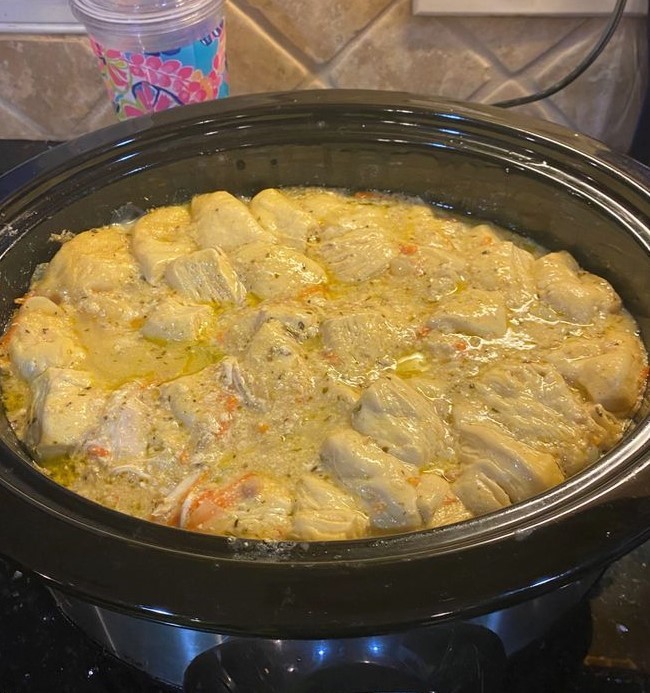 Crock Pot Chicken and Dumplings are a homestyle comfort food made easy. If you love traditional chicken and dumplings, you’ll love this easy crockpot chicken recipe!

Every dumpling must be hand-cut to the exact size and the dough kneaded just so to create the perfect texture.

Chicken And Dumplings
The beauty of this recipe and the reason why it’s one of my favorite crockpot chicken recipes is that it uses several shortcuts to reduce the amount of prep work while still keeping the flavor.

For those who make many crockpot recipes with chicken, you may wonder about how long to cook crockpot chicken. I found in this recipe that after 5 hours, the chicken was thoroughly cooked.

Crockpot Chicken and Dumplings is now one of my go-to Sunday meals. Sundays just feel like a comfort food day to me, and nothing says comfort food quite like homemade chicken and dumplings. While this may not be grandma’s recipe, it is 100% kid-approved and a hit with everyone.

Slow Cooker Chicken And Dumplings Shortcuts
If you are in a hurry to cook flavorful food without all the fuss, it helps if you have a few recipes on hand are super easy. That is what I love about this chicken and dumplings Crock Pot recipe. Here are some tips to get you started and save you loads of time:

Then, instead of chopping up a variety of different vegetables, I decided just to use a bag of frozen mixed vegetables. I defrosted them first so they’d cook properly, but the taste is exactly the same as if I had spent half an hour chopping and dicing when really all I did was pour a bag into the crockpot. Score.

But the genuinely time-consuming part of traditional chicken and dumplings that I cut out in this Crockpot Chicken and Dumplings recipe is making the dumplings from scratch. Instead of making the dough and cutting the individual dumplings myself, I just used refrigerated buttermilk biscuits.

How To Make Chicken And Dumplings In A Crock Pot
As you can tell, I love that I don’t have to be stuck in the kitchen for hours all day trying to make comfort food the family will actually eat. Instead, using the slow cooker saves me tons of valuable time, and we still get to have a meal that makes your tummy warm and your taste buds happy. Okay, time to get started with this chicken and dumplings recipe:

Layer the bottom of the Crock Pot with diced onion.

Add chicken on top of the onion.

In a separate bowl, combine cream of chicken and cream of celery soups along with seasonings.

With one hour left on time, add in defrosted veggies.

TIP: Don’t add them too soon because the texture will be off and they will be mushier and not as tasty.

Flatten biscuits and cut each one into 4 long pieces.

Layer biscuit dumplings on top of the other ingredients.

While the dumplings are cooking, they will kind of hover on the top layer. That is perfectly normal.

When finished cooking, stir to combine dumplings with other ingredients. Doesn’t it look gorgeous and make you hungry! Time to devour!

How Do I Know When Dumplings Are Done?
The easiest way to know if dumplings are done is by piercing them with a toothpick. When they are ready, the toothpick should come out clean when inserted into the dumpling. If anything is sticking to the toothpick, then they need to cook a little longer.

Can You Overcook Dumplings?
When making this easy chicken and dumplings recipe, it’s hard to overcook the dumplings. As long as you follow the directions, you shouldn’t have an issue. However, I know that sometimes life gets in the way and you get busy and 1 hour turns into 2 hours pretty quickly. If you do happen to overcook the dumplings, they will become pretty frail and will be mushy. Don’t worry; you can still eat it, they just may not have the same texture as you had hoped for.

Slow Cooker Chicken And Dumplings Variations
You can’t help but fall in love with slow cooker chicken and dumplings just the way the recipe is written, however, you know how much I like to give you options. Feel free to try different veggies or seasonings to make it your own. Here are some ideas to try:

Garlic – Place some minced garlic in the bottom of the slow cooker with the onions. The garlic will add a light flavor that won’t be too overpowering. I would start with 1 teaspoon, and you can always add more later.

Potatoes – If you decided to add some diced potatoes to this easy chicken and dumplings, toss them in at the beginning. You want them to have plenty of time to cook. I love the potatoes because they add a heartiness to the meal.

Fresh Veggies – I used frozen vegetables because it is so much easier when I am in a hurry; however, you can certainly use fresh. Just chop them up and toss them in. They will need to cook a little longer than frozen, so add them at the beginning instead of the end.

Thyme Leaves – Crush fresh thyme leaves and toss them in with the cream of chicken soup and seasonings at the beginning. Thyme adds a deliciously subtle flavor to the chicken and dumplings with biscuits.

What Kind Of Chicken Do I Need To Use To Make Chicken And Dumplings?
I used boneless skinless chicken thighs in this Crock Pot chicken and dumplings recipe. I use chicken thighs in most recipes because they’re the cheapest cut of chicken to get, which is essential when trying to make inexpensive family meals, and I think they have the most flavor and texture. Be sure to choose skinless chicken thighs as the skin will make this recipe very greasy. You can, however, use other cuts of chicken if you wish. The flavor and texture will not be precisely the same, but you will still have a fantastic meal to share with your family. Try boneless chicken breasts or cook a whole chicken.

Can I Refrigerate Chicken And Dumplings?
Yes, you can refrigerate any leftover chicken and dumplings. It lasts around 3-4 days as long as it’s stored in an airtight container. Perfect for a quick grab and go lunch or dinner. You can warm them in the oven, on the stovetop or the microwave. If you choose the microwave, they will warm up pretty quick so just do about 30 seconds at a time, so you don’t overcook.

Can You Freeze Leftover Chicken & Dumplings?
You will find that this easy chicken and dumplings with biscuits can be frozen! As always, you want to make sure to store leftovers in a freezer-safe container that’s airtight. It’s perfect for meal planning and having a quick dinner that is low-maintenance. Just defrost the leftover chicken and dumplings in the fridge or microwave. To heat them up simply place the leftovers in a skillet or stockpot and allow to cook slowly. You just want the chicken and dumplings with canned biscuits to get warm; you don’t actually have to cook it. Another option is to bake it in the oven at 375 degrees F. for 15-20 minutes.

What Do You Serve With Chicken & Dumplings?
Typically, when I make this chicken and dumplings slow cooker recipe, I plan on it being a one-pot meal. I don’t usually serve anything with it, but if you want to add more to your meal, you certainly can. Take a look at these ideas:

Bread – Serve chicken and dumplings with any form of bread and it’s sure to be a hit. Dinner rolls, bread, and butter, or even breadsticks would all be a great choice.

Potatoes – Mashed or baked potatoes would go really well with this chicken and dumplings Crock Pot recipe.
Salad – It’s always great to start a meal with a fresh salad to get in those extra nutrients and veggies.

Notes
Foe weight watchers dieters, 8 Freestyle Smartpoints per serving (the pts are calculated on the base of 10 servings, you adjust your the serving and the pts accordingly!)