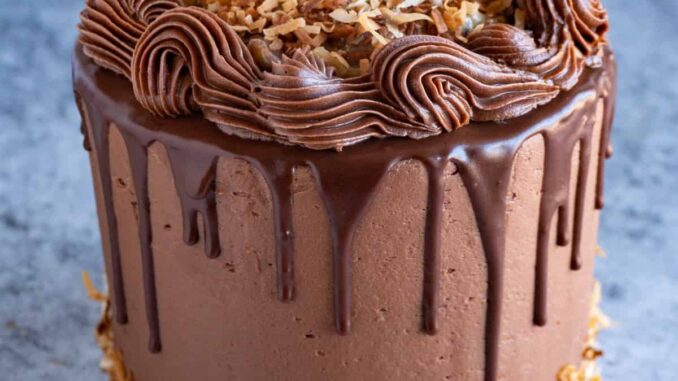 Instructions
How to make German Chocolate Frosting/Coconut Pecan Frosting:
Place coconut in a large skillet and cook over medium low heat. Stir frequently until coconut is golden brown. Remove from skillet and place 1 cup in a small bowl and 2 cups in separate bowl. The 1 cup will be used when you decorate the cake so set that aside for a while.
In same skillet place chopped pecans and heat over medium heat, stirring intermittently. Heat until browned and fragrant. Remove from skillet and set aside.
In a medium sized saucepan add the yolks, sugar, sweetened condensed milk, and vanilla and stir until combined.
Move sauce pan to stove, add butter and heat over medium-low.
Bring mixture to a low boil, stirring constantly, and then once boiling continue to stir for one more minute, until the mixture is thick. Remove from heat and stir in the 2 cups toasted coconut and the toasted pecans.
Allow frosting to cool completely before frosting /filling your cake.
How to make German chocolate cake from scratch:
Preheat oven to Preheat oven to 350°F and move the an oven rack to the second to the lowest position. Grease three 6 inch round cake pans.
Using a stand mixer, mix sugar and butter until fluffy. About 5 minutes.
While mixing the butter and sugar microwave water for 30 seconds then add espresso to it, stirring until dissolved.
Whisk cocoa powder, then buttermilk and vanilla into water/espresso mixture.
In a separate bowl sift flour, baking soda and salt together.
Once butter and sugar are lighter color and fully mixed, add each egg and the yolk, one at a time, into the butter mixture, letting each one fully mix into the batter before adding the next. Add in oil and mix until fully combined. Then beat mixture on medium high speed for a minute- the mixture will be light and fluffy.
Fold in ½ of the flour and then fold in ½ of the buttermilk mixture to the batter. Then fold in remaining flour and then remaining buttermilk mixture.
Bake for 20-25 minutes or until a toothpick inserted comes out clean. Try baking the cakes on the same rack, or baking them one at a time. This will ensure even baking.
Once the cakes are done let them cool completely before decorating.
How to make the best chocolate frosting:
In a stand-up mixer whip your butter until light and fluffy.
Mix in cocoa powder and salt. Alternate stirring in the powdered sugar and heavy cream in increments. I like to do 1 cup powdered sugar, 1 splash of heavy cream, stir and repeat.
Stir in vanilla.
Make sure to make 2 batches of this recipe!
Chocolate Ganache
Wait to make this until you are on step 7 of the cake assembly.
Microwave heavy cream and chocolate chip for 30 seconds, stir, repeat until melted and smooth. Usually take only 30-60 seconds.
Pour into a squeeze bottle and allow to cool.
Assembling the cake:
Level the cakes if needed.
Place bottom cake layer on a 6-inch cake board, using a little frosting on the bottom of the cake to stick it to the board. Place on the cake stand.
Fill piping bag with frosting and cut the tip off to for a medium/large hole (no need for a piping tip for this bag). Pipe a ring of frosting around the top rim of the first layer to create a dam. Then add a nice layer of coconut pecan frosting to the top of the first layer, spreading it into a nice even layer out to the edges of the chocolate frosting ring.
Place the second cake layer on top and repeat with the chocolate and coconut pecan frosting.
Place the third cake layer upside down on top of the second layer. Then either using your piping bag filled with frosting or just a spatula, frost the entire cake in a thin layer of frosting- this is the crumb coat. Try to smooth out the sides and get a nice flat top and sharp edges using your bench scraper and offset spatula, then refrigerate for 10 minutes. You want the frosting to be firmed up a little and not sticky before adding the final coat.
Once your crumb coat has set up frost the cake with the final coat. Use your bench scraper and off set spatula to get really nice and smooth sides and edges. Then gently press the toasted coconut that you set aside when making the coconut pecan frosting around the bottom third of the cake, reserving a little for a step later on.
Refrigerate the cake again for another 10 minutes to allow the final coat to set up. Now is the time to make the ganache. Once your ganache is smooth, pour into the squeeze bottle and allow it to cool until it is just warm. Test out the drip on the side of a bowl. You want the drip to be thick but still run a few inches before it stops and hardens. See notes on how fix a ganache that is too runny or too thick.
Starting on the top edge of the cake, squeeze a little ganache on to the top allowing it to spill over the edge creating a drip, spin the cake a little, squeeze a little more to create another drip and repeat until you have created a nice border drips all around the cake. Then add ganache to the very top/center of the cake. Spread this out (I like to use the offset spatula to do this) to the edges to where it meets up with border. Refrigerate the cake for another 10 minutes, or until the ganache sets up.
Once the ganache is set up pipe on decorative border on the top of the cake using a piping bag, piping tip (I used the 6b tip) and chocolate frosting. Then add more coconut pecan filling to the top of the cake and sprinkle with remaining toasted pecans.
Enjoy!