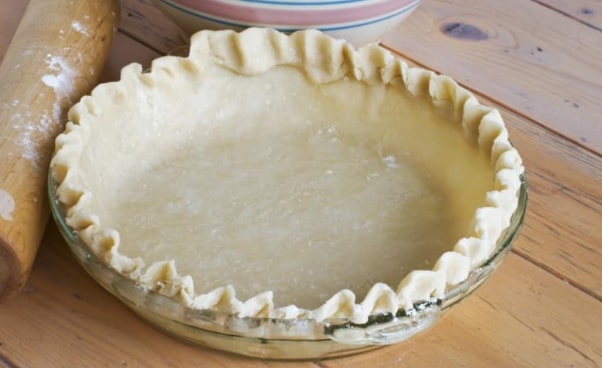 I really can’t think of anything more comfortable now except for a piece of pie with a cup of tea.

Apple pie masala chai
Masala chai tea is one of my favorite teas. I never made spice mixes on my own, but I did some research and here are some of my suggested masala chai spices:

Of course there are many varieties of masala chai or spiced tea. I chose this spice as I already knew before baking it would taste great with a vegan apple pie with buckwheat crust.

Ground ginger, cloves, and allspice add a nice kick to baked goods. I usually only use it in the fall and winter when baking muffins, pies, pies, and biscuits.

Ground cardamom and cinnamon on the other hand is an everyday favorite. I use it in almost all sweet foods and even smoothies. I also add ground cardamom to my coffee every day 🙂

I am very proud of our beautifully clean nature and all the plant foods grown here. The gluten-free flour mixture I use regularly like the buckwheat flour I use in this pie is a great example of clean, non-GMO Finnish food.

The apple that I use in this pie is taken from my parents’ neighbor, he is a beautiful man who has the most beautiful garden, and he looks after it very meticulously. These apples taste like my childhood and are one of the best foods (besides berries) from Finland.

Preheat oven to 200 ° C / 392 ° F.
Chop apple to small pieces. Blend with spices & syrup, and mixing To apples are totaly covered.
Crust: Mixing dried ingredients. Add the vegetable butter and knead the dough until it sticks and does not crumble.
Set aside about a third of the crust and press the rest into the baking tray, from the bottom and the edges.
Add the marinated apples over the crust.
Using a rolling pin, roll the rest of the dough in a circular shape large enough to cover the baking tray. Note: If the dough is too sticky, let it cool in the freezer for a few minutes. You can also add a little flour to it when rolling.
Place the circular shape over the pie. Making little holes in center.
Mix the syrup and water and spread the pie with the mixture.
Bake at 200 ° C / 392 ° F for 35-40 minutes or until crust is crispy and brown in color.
Eat pie as is or with ice cream, whipped cream, and / or vanilla sauce.