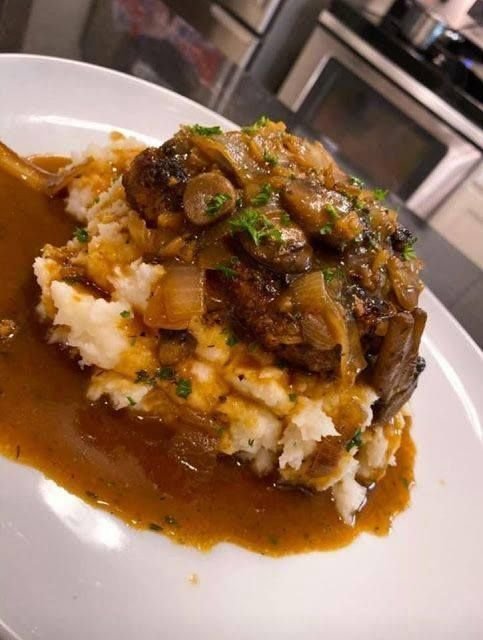 For the Salisbury Steaks:

For the Mushroom Gravy:

In a large bowl, mix the grated onion (with its juices), the breadcrumbs, the egg, kosher salt, and black pepper until well combined.

Add the lean ground beef to the bowl with the breadcrumb mixture and mix until well combined – I suggest wearing plastic gloves and using your hands to ensure all the ingredients are completely incorporated.

Form 4 oval shaped patties with your hands about ¾” thick.

Heat a large skillet (I use cast iron) over high heat. Only after it’s searing hot (after about 2 minutes), add the olive oil (1 Tbsp.) to the pan and swirl to coat.

Carefully place the patties into the hot pan and cook for 2 minutes on each side – until each has nice brown color. To get the best color, don’t move them until the two minutes are up. You will not cook them through at this step.

Remove the patties to a plate. Set aside.

Add the butter (2 Tbsp.) to the skillet. Once the butter has melted, add the sliced mushrooms.

Add the beef broth, stirring constantly to incorporate the flour, and bring it to a simmer. Simmer about 5 minutes or until the sauce has thickened.

Add the partially cooked steak patties back into the gravy mixture and simmer, uncovered, for 5 to 10 more minutes (the internal temperature should be 160° F) and the gravy has thickened.

Serve steaks over mashed potatoes with mushroom gravy drizzled on top. It is fantastic!

• Time Saving Tip: You can form the patties ahead of time and store in your refrigerator for up to two days.

• Dairy-free Version: use more olive oil instead of butter to make the gravy.

• Gluten-free Version: use gluten-free breadcrumbs in the steaks and use cornstarch instead of flour (added after the broth in a slurry) for the gravy.

• To Freeze Uncooked Steaks: Place the steaks on a lined baking sheet in a single layer, then flash freeze for about 2 hours until solid. Transfer them to freezer-safe bags or containers for up to 2 months. Thaw overnight in the refrigerator and proceed with the recipe as written.

• To Freeze Cooked Steaks: Allow steaks to cool completely, then freeze steaks in the gravy in freezer-safe containers for up to 2 months. Thaw overnight in the refrigerator, then reheat in a pan or in the oven until warmed all the way through.